The Art Of The Hollywood Backdrop 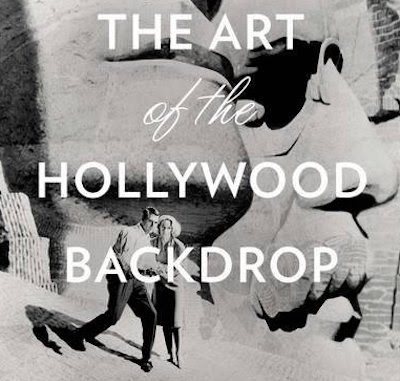 The Art Of The Hollywood Backdrop, by Richard M Isackes and Karen L Maness, is a history of Hollywood studio backdrops (scenic trompe l'oeil backgrounds). There have been a few books on related aspects of filmmaking, such as matte paintings (The Invisible Art, by Mark Cotta Vaz and Craig Barron) and production design (Caligari's Cabinet & Other Grand Illusions, by Leon Barsacq; and Designs On Film, by Cathy Whitlock), though this "DEFINITIVE HISTORY" (as the back cover justifiably proclaims) is the first survey of film backdrops.

Whereas theatrical backdrops are often stylised, cinematic backings are (like matte paintings) designed to deceive the audience: to create a realistic 2D simulation of a 3D environment. As the authors explain, "backings created for the movies of Hollywood were rarely recognized for what they were - nor was that their purpose. These special effect backings, the largest paintings ever created, were breathtaking in their artistic and technical virtuosity."

Aside from double-page photographs of Georges Melies and Fritz Lang, The Art Of The Hollywood Backdrop is devoted entirely to films from the American studio system. A 100-page introduction traces the history of the Hollywood backdrop, and subsequent chapters profile individual backdrop artists. This is a substantial and comprehensive book, lavishly presented in a slipcase. It has 300 illustrations, many of which are stunning full-page photographs (though twenty-eight pages on Lemony Snicket's A Series Of Unfortunate Events is perhaps excessive).
Categories: books
continued...