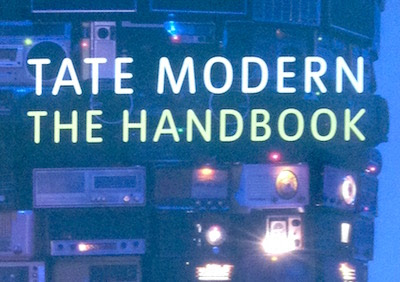 Tate Modern: The Handbook has been updated in a fourth edition to reflect this year's opening of the Tate's extension, Switch House. Tate Modern opened in 2000, and has since become one of the world's greatest museums of modern art. Positioned opposite St Paul's Cathedral in London, the Tate is a secular cathedral, and its vast Turbine Hall has inspired a series of enormous sculptures and installations.

The guidebook, edited by Matthew Gale, features a foreword by Tate director Nicholas Serota and an essay on the history of the Tate ("FROM SUGAR CUBE TO WHITE CUBE") by Frances Morris. Previous editions profiled 100 modern and contemporary artists, though this edition has been expanded to 300.

Each artist profile is illustrated by a work from the Tate's permanent collection, including Chris Ofili's The Upper Room (previously installed at the Victoria Miro Gallery, and purchased despite Ofili being a Tate trustee), Pablo Picasso's La Danse (described by John Richardson as "one of Picasso's most profound and mysterious paintings"), and Apichatpong Weerasethakul's video installation Primitive.
Categories: art, books
continued...