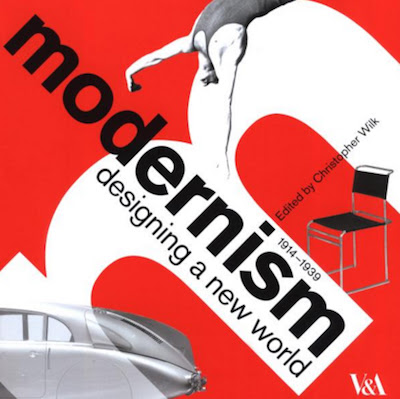 The Victoria & Albert Museum's exhibition Modernism: Designing A New World 1914-1939, curated by Christopher Wilk, opened in London in 2006 and was later shown in Germany and the US (where it was retitled Essential Modernism). The catalogue, edited by Wilk, contains eleven broad essays, and extended captions describing each of the 300 exhibits. The essays are organised into themes, ranging from conventional Modernist concepts (such as mechanisation and utopianism) to more surprising topics (nature and athleticism).

The catalogue has comprehensive coverage of design, architecture, and mass culture, including an essay on Modernist cinema. It defines Modernism as: "an espousal of the new and, often, an equally vociferous rejection of history and tradition; a utopian desire to create a better world, to reinvent the world from scratch; an almost messianic belief in the power and potential of the machine and industrial technology; a rejection of applied ornament and decoration; an embrace of abstraction; and a belief in the unity of all the arts".

There have been previous surveys of Modernism, most famously Nikolaus Pevsner's essential Pioneers Of The Modern Movement (reissued as Pioneers Of Modern Design). There are also numerous histories of Modernism's influence on art (Art Since 1900, by Hal Foster et al.), design (History Of Modern Design, by David Raizman), architecture (Space, Time & Architecture, by Sigfried Giedion; and Architecture Since 1900, by William JR Curtis), typography (Pioneers Of Modern Typography, by Herbert Spencer), and sculpture (Modern Plastic Art, by Carola Giedion-Welcker; reissued as Contemporary Sculpture).

The key Modernist manifestos were Le Corbusier's Vers Une Architecture (translated as Towards A New Architecture, and later as Toward An Architecture) and Jan Tschichold's Die Neue Typographie (The New Typography). The International Style, by Henry Russell Hitchcock and Philip Johnson, defined Modernist architecture. Foto-Auge (Photo-Eye), by Tschichold and Franz Roh, was a portfolio of 'new vision' photography. Die Kunstismen (The Isms Of Art), by Hans Arp and El Lissitzky, was a guide to Modernist art movements from 1914 to 1924.