A Rape On Campus 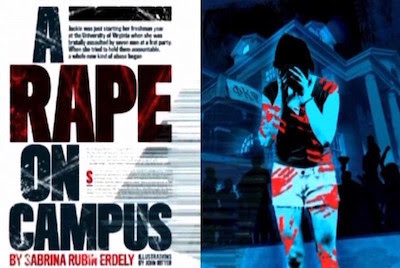 Rolling Stone magazine is currently facing two lawsuits over an investigative article it published last year. Sabrina Erdely's nine-page feature A Rape On Campus appeared in the 4th December 2014 issue. It alleges a culture of sexual assault on American college campuses, and profiles a student who claims she was gang-raped during a fraternity party at the University of Virginia: "at UVA, rapes are kept quiet, both by students... and by an administration that critics say is less concerned with protecting students than it is with protecting its own reputation from scandal."

The rape victim, identified only as Jackie (a pseudonym), recounts her ordeal in graphic detail: "seven men took turns raping her, while two more - her date, Drew, and another man - gave instruction and encouragement." She also describes her friends' reactions following the attack, explaining how they discouraged her from reporting it: "The three friends launched into a heated discussion about the social price of reporting Jackie's rape".

After the article was published, a police investigation found no evidence that a rape or assault had taken place. In fact, many of the details Jackie provided turned out to be incorrect. For instance, she said that her attacker was a Phi Pappa Psi member who worked as a lifeguard, though no members of that fraternity were employed as lifeguards at the time. There was also no party or social function on the date Jackie claimed to have been raped.

Jackie's story was discredited, and Rolling Stone retracted the article, deleting it from its website. The magazine also commissioned an investigation by the Columbia University School of Journalism, which it published on 23rd April. That report, titled What Went Wrong?, found that Erdely had relied on Jackie as her only source for the rape story, and had not attempted to verify the information Jackie gave her: "the problem was that she relied on what Jackie told her without vetting its accuracy."

Jackie's three friends launched the first legal action in relation to the article, though their case was dismissed earlier this year. Lawsuits issued by the University and Phi Kappa Psi are still in progress. Rolling Stone's managing editor, Will Dana, left the magazine last month.