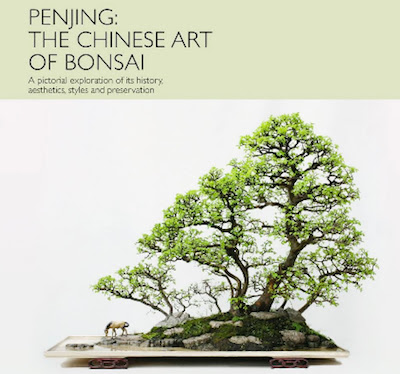 Penjing, a form of Chinese horticulture that dates from the Han dynasty, is "a living art form using miniature trees grown in containers (pots or trays), along with shaped rockeries and other materials, to create aesthetic representations of natural landscapes." Penjing: The Chinese Art Of Bonsai - A Pictorial Exploration Of Its History, Aesthetics, Styles, & Preservation is the most authoritative English-language guide to penjing.

Author Zhao Qingquan is also a penjing artist, and many of his own works are reproduced, though there's also a historical section illustrated with depictions of penjing from Chinese paintings. The book also includes a taxonomy of the three categories of penjing: 'shumu' (tree), 'shanshui' (landscape), and 'shuihan' (water and land).

Each of the three styles of penjing has an equivalent in Japan: the Japanese art of bonsai was influenced by shumu penjing, saikei resembles shuihan penjing, and bonkei is similar to shanshui penjing. Shuihan penjing also influenced Vietnamese hon non bo. (Another Chinese art form, the scholar's stones known as gongshi, inspired the similar Japanese suiseki and Korean suseok.)
Tags: books
continued...