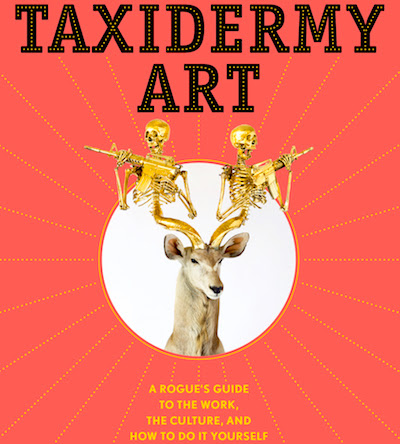 Taxidermy Art: A Rogue's Guide To The Work, The Culture, & How To Do It Yourself, by self-styled 'rogue taxidermist' Robert Marbury, profiles a selection of contemporary taxidermists and provides a step-by-step guide to DIY taxidermy. Only twenty artists are included, three of whom (including the author) don't actually use real animals in their work.

As the title suggests, Taxidermy Art focuses on taxidermy animals presented as sculptures or installations, not as traditional decorative or educational displays. The specimens have all been manipulated in some way, either juxtaposed with incongruous found objects or grafted together to form hybrid creatures. Very few of the animals are anthropomorphised, in contrast to the twee Victorian tableaux of Walter Potter. (Potter is discussed alongside other taxidermy pioneers in a historical chapter, though this section is brief and unillustrated.)

The selection of taxidermists includes Polly Morgan (whose Psychopomps exhibition was held in 2010) and Sarina Brewer (who uses 'esodermy' to preserve the bones and muscle tissue of skinned animals, in a reversal of the traditional taxidermy process). Damien Hirst's shark (The Physical Impossibility Of Death In The Mind Of Someone Living) and Robert Rauschenberg's eagle (Canyon) are described though not illustrated, and other celebrated artist-taxidermists such as Thomas Grunfeld and Maurizio Cattelan are not mentioned at all.

Taxidermy Art is interesting as a concise portfolio of recent taxidermy artworks, though it's not really useful for reference as no dates or dimensions of the works are provided. Alexis Turner's Taxidermy is a more extensive guide to the subject.
Categories: books
continued...