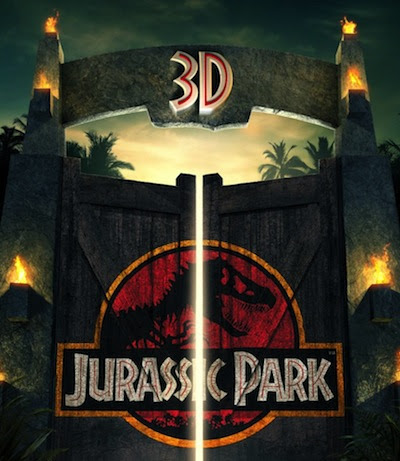 Steven Spielberg's Jurassic Park has been rereleased in 3D, retrofitted (or dimensionalised) like Top Gun and Toy Story. I saw Jurassic Park four times at the cinema when it was first released, and it's great to see it back on the big screen after twenty years. (Time flies...) It's screening in IMAX DMR 3D and non-IMAX digital 3D formats.

In 70mm IMAX, the image is enormous, though Jurassic Park has been reframed from 1.85:1 closer to the IMAX 1.43:1 ratio, thus cropping some of the frame. One of the potential advantages of IMAX is its increased image quality (as in the 70mm IMAX DMR print of Inception); however, in this case the 3D projection and glasses result in a darker and sometimes more blurred image.

In 1993, the digital effects in Jurassic Park were truly revolutionary. Along with the T-1000 android in Terminator II, Spielberg's digital dinosaurs introduced realistic CGI into mainstream cinema. Since then, CG dinosaurs have become a cliche, appearing in everything from Walking With Dinosaurs to The Tree Of Life. The effects have, thankfully, not been tweaked for the 3D version, though additional layers of rain and woody debris were added to the Tyrannosaurus rex chase sequence.
Categories: films
continued...