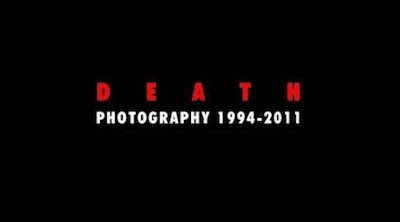 Death: Photography 1994-2011 is a collection of images by Japanese photographer Tsurisaki Kiyotaka. Since 1994, Kiyotaka has specialised exclusively in photographing corpses, and the book contains photos of accident victims, crime scenes, mortuaries, and funerals.

Most of the images were taken in South America, which has a long cultural association with death, from the traditional Dia de Muertos festival to the exploitative 'prensa roja' tabloids. The book begins, however, with a series of grisly photographs from Thailand, mostly depicting fatal car crashes.

Kiyotaka's photographs are remarkable largely for their shocking subjects rather than for their artistic quality. The single exception - Kiyotaka's only manipulated image - is a double-exposure depicting a foetus being removed from its mother's body in Colombia. Aside from this self-consciously artistic composition, most of the photographs resemble those in the book Death Scenes.