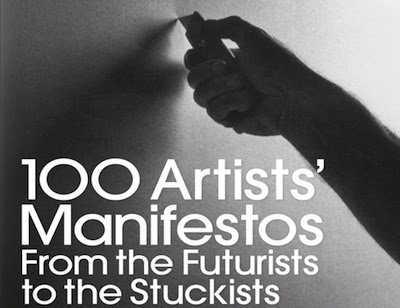 100 Artists' Manifestos: From The Futurists To The Stuckists is an anthology of manifestos from 20th century art movements, edited by Alex Danchev and organised with minimalist clarity. Danchev's comprehensive selection includes not only artists but also filmmakers and architects. The concept is similar to the excellent Manifesto: A Century Of Isms, by Mary Ann Caws.

Danchev begins with FT Marinetti's Futurist Manifesto, published on the front page of Le Figaro in 1909, the document that inspired all subsequent art manifestos. The various avant-garde movements of the 1920s all published manifestos inspired by Marinetti's breathless enthusiasm.

The book ends on a sour note with the Stuckists, a reactionary group of anti-Conceptualists who are impossible to take seriously. If Danchev had extended the survey into the early 21st century, he could have concluded instead with the optimistic Sustainism manifesto published in 2010.
Categories: books
continued...