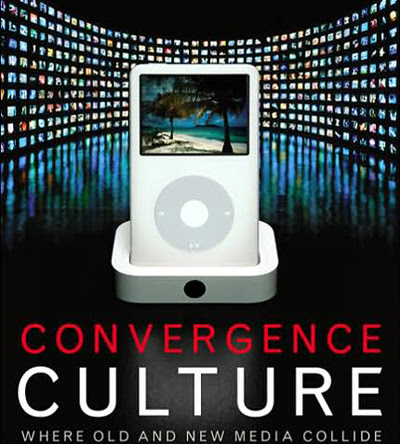 Convergence Culture: Where Old & New Media Collide, in its updated and expanded paperback edition, explores audience participation in the 'web 2.0' era. Author Henry Jenkins dismisses the "Black Box Fallacy" that television, telephone, films, games, and the internet will all be streamed to a single set-top box via a fibre-optic 'information superhighway', and argues instead that the media landscape is becoming increasingly multifarious. He also perceives a shift from passive to active media consumption. These trends converge into a new paradigm: the multi-platform, interactive narratives of 'transmedia'.

Smartphones represent a potential technological convergence, though Jenkins focuses on the synergistic convergence of texts and narratives, with multi-national conglomerates cross-promoting their products across a wide media spectrum. He cites The Matrix as an example of this corporate inter-textuality, with the film trilogy The Matrix I-III followed by a cartoon (The Animatrix), a game (Enter The Matrix), and various comics (The Matrix Comics I-II). These additional products are revenue-generating spin-offs, though they also add to the narrative complexity of the Matrix universe, promoting discussion among fans and acting as an advanced form of viral marketing.

Jenkins's main research interest, and the central focus of Convergence Culture, is the participatory nature of audience responses to contemporary media. He highlights the product-placement, sponsorship, and interactivity inherent in 'reality TV' quasi-documentary series such as Survivor. He examines an individual case-study in each chapter, though these are restricted to either reality TV or 'fan-fiction' - neither of which are genres that I'm particularly impressed by. Jenkins is particularly fascinated by fan-fiction - fans writing alternative narratives for existing characters - though to me it seems marginal and derivative. Regular sidebars, in which he discusses broader trends and contexts, are more interesting than the case-studies in the body text.

While the tools of media production are available to many consumers, we do not all utilise them to their full capacities. Most audience members (fortunately) do not write fan-fiction or create 'mashup' video re-edits. More people read blogs than write them. We do, however, interact with our media more than ever: time-shifting television, commenting on websites, voting for reality TV contestants, collaboratively 'crowdsourcing' data, and of course using social networks.
Tags: books, media
continued...