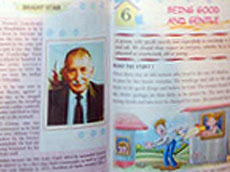 A Muslim group in Lucknow, India, has complained after a cartoon image of Mohammed was printed in a school textbook. There have been calls for the book, Moral Education: Ethics by Chandra Prakash, to be withdrawn; the offending cartoon appears in a chapter titled Being Good & Gentle. Visual depictions of Mohammed have caused international controversy ever since a dozen Mohammed caricatures were printed in the Danish newspaper Jyllands-Posten in 2005.

This is not the first time Mohammed has been depicted in a school textbook: an illustration from The Remaining Signs Of Past Centuries was censored from Histoire Geographie in France. It is also not the first Indian book to feature a Mohammed image: the author of Hajarat Muhammad was arrested in India after his book depicted Mohammed on its cover.
Categories: censorship
continued...