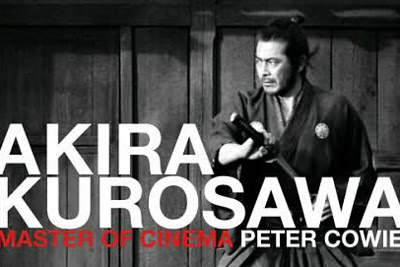 Akira Kurosawa: Master Of Cinema is a beautiful and lavish book celebrating Kurosawa's contribution to world cinema. The book's numerous full-page photographs are its main attraction: glossy reproductions of film stills, paintings, and script drafts, all of which look stunning.

The author, Peter Cowie, divides Kurosawa's films into modern and historical narratives (the traditional Japanese Gendai-Geki and Jidai-Geki dichotomy), with an additional chapter on Kurosawa's literary inspirations and a rather esoteric discussion of miscellaneous 'elements'. Cowie has written a satisfactory overview of Kurosawa's life and work, though the text is clearly secondary to the gorgeous images.

Martin Scorsese provides a brief foreword, and there is an introduction by Kurosawa expert Donald Richie. Cowie acknowledges that Richie's book The Films Of Akira Kurosawa is the definitive account of Kurosawa's work, and offers Master Of Cinema as "a pictorially driven tribute" to Kurosawa that complements Richie's study.

Master Of Cinema, with a short note written by Kurosawa's daughter Kazuko, is a semi-official commemoration of Kurosawa's centenary. Kurosawa's own perspective is provided in his book Something Like An Autobiography and the anthology Akira Kurosawa: Interviews. More of Kurosawa's paintings can be seen in Karl French's book Art By Film Directors.

Cowie also wrote one of the first studies of the films of Orson Welles, A Ribbon Of Dreams; authorised production histories of The Godfather (The Godfather Book) and Apocalypse Now (The Apocalypse Now Book); and a BFI Film Classics analysis of Annie Hall. He is also an authority on the career of Ingmar Bergman.
Tags: books
continued...