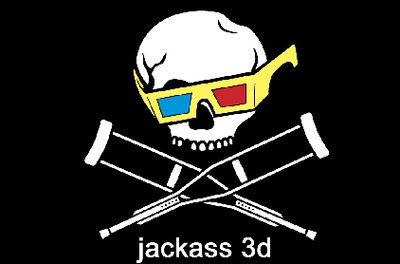 Jackass 3D is the sequel to Jackass II, and is again directed by Jeff Tremaine. Like the previous film, it contains violent and scatological pranks; it's actually surprising that Paramount would distribute a film that features a volcano of excrement. As the men are now reaching middle-age, this will presumably be the final Jackass film.

Johnny Knoxville, clearly the most professional group-member, now acts mainly as an announcer, excusing himself from most of the stunts. After being punched, or even urinated on, the men always laugh with (and at) each other, and I wonder how much of this camaraderie is genuine. In addition to the 3D, many stunts were filmed with ultra-fast cameras, resulting in plenty of slow-motion action footage, and this makes the film more cinematic than its predecessors.
Categories: film reviews
continued...