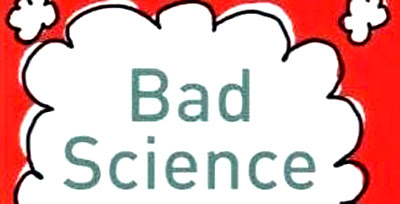 Two Daily Mail headlines: "BREAST CANCER RISK TO CAREER WOMEN" (2001) and "Daily dose of housework could cut risk of breast cancer" (2009). What's the connection? Firstly, they are both blatantly anti-feminist, encouraging women to forget about the glass ceiling and be contented housewives. Also, they are both examples of scientific research either misunderstood or distorted by the media (like 'unspeak') for sensationalist or ideological reasons.

Ben Goldacre's entertaining and sceptical book Bad Science, an expanded version of his column from The Guardian, exposes scaremongering journalism (also discussed in Flat Earth News) and manipulated statistics ('lies, damned lies, and...'). A chapter on Matthias Rath (titled The Doctor Will Sue You Now) was omitted when the book was first published, though is included in the second edition.
Categories: books, media
continued...