Uncle Boonmee
Who Can Recall His Past Lives 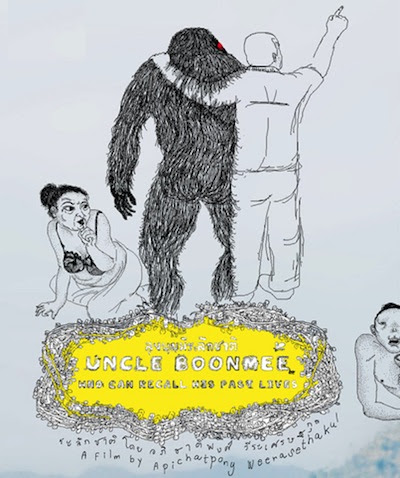 Uncle Boonmee Who Can Recall His Past Lives, directed by Apichatpong Weerasethakul and filmed in 16mm, won the Palme d'Or at Cannes this year. It is currently being screened at SFX Emporium in Bangkok. The film is part of Apichatpong's Primitive installation, which also includes the short films Phantoms Of Nabua and A Letter To Uncle Boonmee.

The central character, Boonmee, is dying of kidney failure, which Apichatpong's father also suffered from: like Syndromes & A Century, the film is partly autobiographical. Boonmee is cared for by his sister (Jen) and his young cousin (Tong), though one evening the ghost of his dead wife materialises at the dining table. A few minutes later, Boonmee's long-lost son returns in the form of an ape-spirit with glowing red eyes.

Boonmee reflects on his life as a former soldier who killed Communist rebels in the 1970s (making it difficult to sympathise with the character), and we are shown some of his previous incarnations: a buffalo which escapes from its owner, and a princess who seduces one of her servants and makes love with a talking catfish. Each of the film's six reels was filmed in a different cinematic style (though all include Apichatpong's characteristic long takes), as a tribute to analogue cinema at a time when digital cameras and projectors are replacing celluloid.

After Boonmee's funeral, Tong becomes a monk, though he misses the comforts of home and comes to Jen's hotel room for a shower. (Tong is played by Sakda Kaewbuadee, who also appeared as a monk in Syndromes & A Century, which was effectively banned in Thailand and finally released only in a censored version.) Finally, Tong and Jen visit a karaoke restaurant, either as an out-of-body experience or in a parallel universe.

As in Tropical Malady, the forest is a dwelling for animal spirits, though in Uncle Boonmee the supernatural elements are more explicit and tangible. Also, the central theme of Uncle Boonmee is predicted in Tropical Malady, when one character says: "Remember my uncle who can recall his past lives?"
Categories: Apichatpong Weerasethakul, film reviews, Thailand
continued...