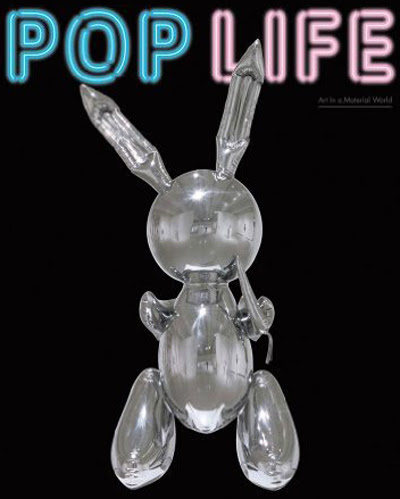 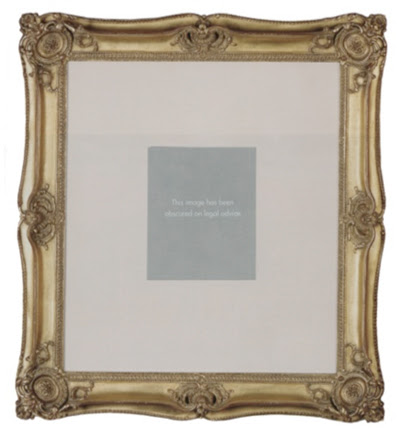 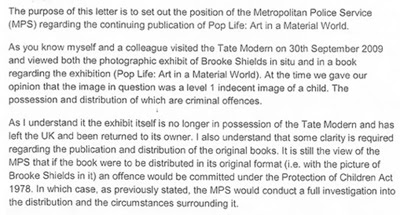 The catalogue for Tate Modern's current exhibition Pop Life has been deemed illegal by the Metropolitan Police Service. The Met ordered the removal of Richard Prince's photograph Spiritual America on the day before the exhibition opened, and the Tate withdrew the catalogue from sale while it sought legal advice.

In a letter to the Tate, the Met confirmed that Spiritual America is "a level 1 indecent image of a child. The possession and distribution of which are criminal offences." They also cautioned that the catalogue could not be legally sold uncensored: "if the book were to be distributed in its original form (i.e. with the picture of Brooke Shields in it) an offence would be committed under the Protection of Children Act 1978."

In his catalogue essay, Jack Bankowsky acknowledges that Shields was "decidedly underage" and that "Prince invites us to ogle Brooke Shields in her prepubescent nakedness". To avoid prosecution, a sticker has now been placed over the offending photograph: "This image has been obscured on legal advice" (on page 123). The case recalls that of Robert Mapplethorpe's photograph Rosie, which UK police deemed illegal in 1996, despite it appearing in several monographs of the photographer's work.

The catalogue itself, edited by Bankowsky, Alison M Gingeras, and Catherine Wood, is an excellent exploration of artists (following Warhol, who was influenced by Dali) who "engaged with mass media and the market and cultivated artistic personas". Scott Rothkopf's essay on Jeff Koons' Made In Heaven series is a highlight. There is also a detailed bibliography.
Categories: art, books, censorship
continued...