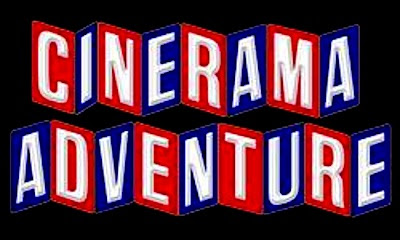 Cinerama Adventure is a feature-length documentary written and directed by David Strohmaier. It presents a comprehensive history of the Cinerama film production and distribution process.

Cinerama was developed by Fred Waller, who originally created an eleven-projector system called Vitarama in 1939, later modified to five projectors as a flight simulator for trainee pilots in World War II. Rare footage of both versions of Vitarama is included in Cinerama Adventure. Another key Cinerama antecedent was the triptych Polyvision system used by Abel Gance for Napoleon in 1927, also featured in Cinerama Adventure. Gance was inspired by the incredible Cineorama of 1900, a truly panoramic display produced by ten 70mm projectors.

No surviving Cineorama footage exists, and the process is not discussed in Cinerama Adventure. Also, footage from multi-projector processes produced after Cinerama, such as Disneyland's Circle-Vision (nine projectors, 1955), the Russian Kinopanorama (three projectors, 1958), and the experiments discussed by Stan van der Beek (author of Culture: Intercom & Expanded Cinema) and Gene Youngblood (author of Expanded Cinema), is also omitted.

Filming in Cinerama required three synchronised 35mm cameras, which could then be projected as a triptych onto a curved screen at an aspect ratio of 2.89:1. This resulted in an immersive audience experience, with the screen extending into the viewer's peripheral vision. Also, the process utilised seven audio tracks, with speakers positioned at the front, back, and sides of the auditorium.

Cinerama Adventure includes numerous short clips from the first Cinerama film, This Is Cinerama, which premiered in 1952 and is most famous for its roller-coaster opening sequence. [I saw This Is Cinerama in one of the three surviving Cinerama cinemas, the National Media Museum in Bradford, UK.] This Is Cinerama is not commercially available, so the clips in Cinerama Adventure are invaluable. Longer extracts were featured in The Reality Trip (a 1995 BBC Moving Pictures documentary), though this has never been released on video.

The documentary also includes extensive footage from various Cinerama travelogues, and from How The West Was Won, one of the few narrative Cinerama films. Finally, brief clips from conventional 70mm films projected onto Cinerama screens (including Kubrick's 2001: A Space Odyssey, originally shown in 2.21:1 with six audio tracks) are included. All Cinerama extracts are presented using the new Smilebox process, a digital simulation of the curved Cinerama screen.

Cinerama was a relatively short-lived process, as the three-camera system made close-ups and vertical compositions virtually impossible. Also, it was prohibitively expensive for cinemas to install the two extra projection booths necessary for Cinerama exhibition. However, the format did directly inspire the use of anamorphic widescreen processes such as CinemaScope, which successfully approximated the spectacle of Cinerama without the need for such cumbersome cameras or drastic cinema alterations. Cinerama, CinemaScope, and also 3D projection (all popularised in the early 1950s) were gimmicky attempts to draw audiences away from television and other pursuits, after American cinema audiences declined steeply in the late 1940s. (History is currently repeating itself, with new IMAX and 3D crazes perhaps reacting to the popularity of home theatre systems and HDTV.)

Cinerama Adventure features interviews with film historians such as John Belton (author of Widescreen Cinema) and Kevin Brownlow (who restored Napoleon and directed the documentary series Hollywood), and director Joe Dante. Belton and Dante also contributed to The Reality Trip, which discussed one aspect of Cinerama not mentioned in Cinerama Adventure: the vertical seams which appeared when the films were projected. These seams were often disguised by positioning conspicuous trees or similar objects within the frame, creating another aesthetic limitation for Cinerama directors.
Tags: films
continued...