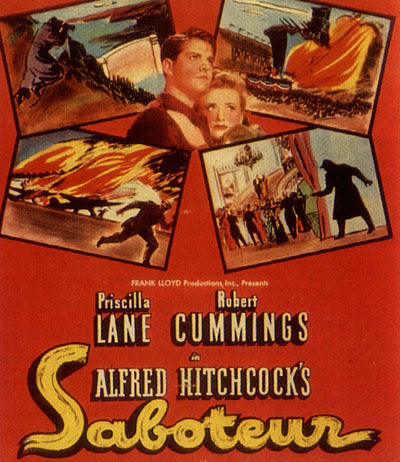 Saboteur is archetypal Alfred Hitchcock: an innocent man caught up in counter-espionage and on the run from the authorities. Hitchcock had used almost exactly the same plot in his earlier (and better) British thriller The 39 Steps, and he would return to it again for North By Northwest.

Saboteur's leading man, Robert Cummings, doesn't quite have the charm of Robert Donat (The 39 Steps) or Cary Grant (North By Northwest). The supporting cast, however, includes a plethora of fascinating characters, such as a truck driver who looks like (but isn't) James Cagney, a kindly blind hermit (perhaps influenced by a sequence from The Bride Of Frankenstein), and even a group of circus freaks. As usual with Hitchcock, the villains are the most interesting figures, and Saboteur's spymaster, played by Otto Kruger, is as suave as those of The 39 Steps, North By Northwest, and Notorious.

The film is bookended by two impressive action sequences: a factory fire, with black smoke ominously filling the screen (the eponymous saboteur is an arsonist); and a climactic scene set at the top of the Statue of Liberty (a precursor of the Mount Rushmore chase scene in North By Northwest). But in between those two sequences, there are too many unexplained plot holes (methods of escape and reunion are conveniently omitted) and too much overtly patriotic speechifying (as Saboteur was made during World War II).
Tags: films
continued...