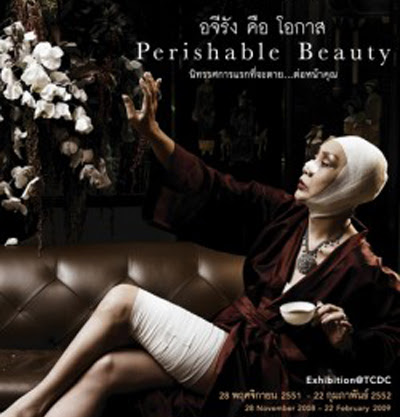 Perishable Beauty, running from 28th November 2008 until 22nd February 2009) at Bangkok's TCDC, is an exhibition exploring the transience of physical perfection (also the theme of The Way Of All Flesh, by Midas Dekkers). The exhibition's installation is stunning, though the exhibits themselves are less substantial.

A banqueting table laden with rotting food, sealed in an air-tight tank and growing mouldier every day, is the most impressive exhibit. There is also a diamond created from human ashes, produced commercially by Algordanza. Other displays, relying on TV clips, photographs, and everyday objects, are underwhelming.

Although the Perishable Beauty poster is seemingly inspired by Orlan, her work is not included in the exhibition. Also, the exhibition is filled with dead flowers yet Otto Berchem is not represented. (His sculpture Deadheading was shown in Bangkok two years ago, at The Suspended Moment.) Indeed, the exhibition is more suited to a museum than to TCDC, as it's educational rather than artistic.
Tags: art
continued...