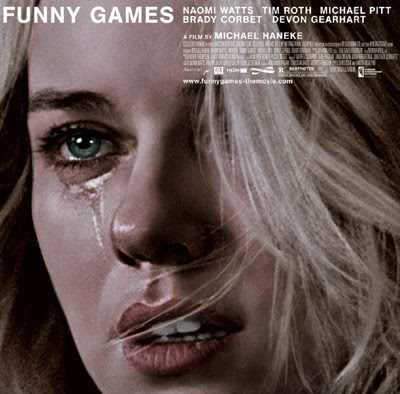 The Austrian version of Michael Haneke's Funny Games was released in 1997. The film was intended as an endurance test for viewers, and Haneke has called it his only deliberate act of audience provocation. In the film, two articulate, charming, yet sadistic young men torture a bourgeois family. The scenario resembles Kubrick's A Clockwork Orange, and Haneke returned to the theme with the more subtle Cache in 2006.

This year, Haneke remade Funny Games in Hollywood. The only differences are the language (English) and the cast (led by Naomi Watts and Tim Roth). The script has not been changed, and the same ideas are explored: the total emasculation of the husband/father, the sudden disruption of bourgeois complacency, and the breaking of the fourth wall to render the audience complicit in the action.

The soundtrack, camerawork, and editing are practically identical to the original Funny Games, to an even greater degree than Gus van Sant's Psycho remake. To such an extent, in fact, that the exercise becomes redundant - why don't American viewers simply watch the subtitled original version?