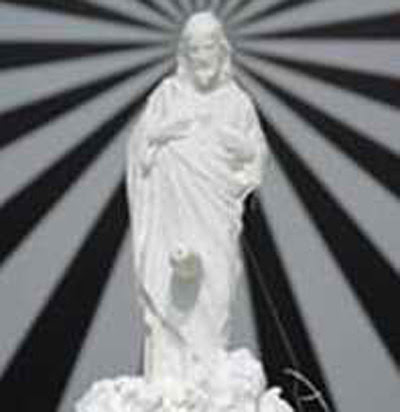 An installation by Terence Koh, Gone Yet Still, may result in criminal charges against the Baltic art gallery. Koh's work, a statuette of a tumescent Jesus, was shown earlier this year, and, in a private prosecution, a member of the public has accused the gallery of outraging public decency. Baltic came under fire last year for a Nan Goldin photograph, though the image was eventually cleared of obscenity. In 2006, the student magazine The Insurgent published cartoons of Jesus with an erection.

Tumescent Christs have caused artistic controversies before, including a Belgian sculptor's prosecution for blasphemy in 1988. Danish artist Jens Jorgen Thorsen painted a tumescent Christ on the wall of a railway station in 1984. JAM Montoya's 1997 photograph El Ultimo Deseo depicts Christ with an erection. A series of three paintings (Man Of Sorrows, circa 1530) by Maaten van Heemskerck depict Christ in a similar state, as discussed in Leo Steinberg's book The Sexuality Of Christ In Renaissance Art & In Modern Oblivion.
Tags: art, censorship
continued...