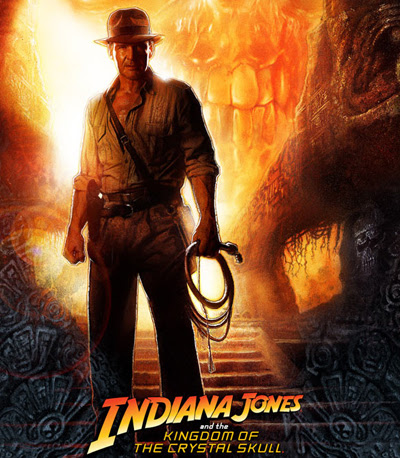 The fourth film in the Indiana Jones series, Indiana Jones & The Kingdom Of The Crystal Skull, is similar in tone to the three earlier films, with wit and serial-style adventure in equal measure. Again, it's directed by Steven Spielberg and based on a story by George Lucas.

Unfortunately, these days Lucas can't resist CGI. (His Star Wars prequels were almost entirely computer-generated.) In interviews, Spielberg stresses how traditional the action sequences and special effects are, in keeping with those of the earlier Indiana Jones films (and Spielberg is known for his love of analogue film technology), yet there are still too many CGI elements here. The CG aliens in the finale are excusable, but rendering monkeys, insects, and waterfalls with CGI is just lazy.

As the rather clunky title suggests, the plot is a little convoluted. It's something about aliens from another dimension bringing civilisation to the ancient Mayans, though it results in exposition overkill. After all that exposition, only the most cursory of explanations is given for the incomprehensible events at the end of the film. Anyway, shouldn't Spielberg be done with flying saucers by now? (The film's MacGuffin object is inspired by quartz skulls which, while rumoured to be pre-Columbian artefacts with paranormal powers, are more likely to be 300-year-old fakes.)

The film is set in 1957, so the bad guys this time are Communist Russians. (Since the end of the Cold War, Russians have been replaced as Hollywood movie antagonists by Europeans and Arabs.) The lead villain, played by Cate Blanchette, never poses a real threat; thus, while the chase sequences are exciting, they aren't especially suspenseful, because Blanchette is not particularly scary. The 1950s setting also allows for comments on US domestic nuclear testing (in an eerily realistic mock-suburban test site) and paranoid anti-Commie witch-hunts, though these themes are dropped pretty quickly.

Harrison Ford is on form as Indy, and it's possible to suspend your disbelief that a man his age can still be an action hero. This time around, Ford is joined by Shia LaBeouf, who makes his entrance on a motorcycle in an homage to Marlon Brando's character in The Wild One. In one of Hollywood's least surprising plot twists, LaBeouf's character is later revealed to be Indy's son.

In the first sequence, there's a glimpse of the Ark of the Covenant, a subtle nod to the first (and best) Indiana Jones film, Raiders Of The Lost Ark. But how many of the new film's audience-members will get the reference?
Categories: films
continued...