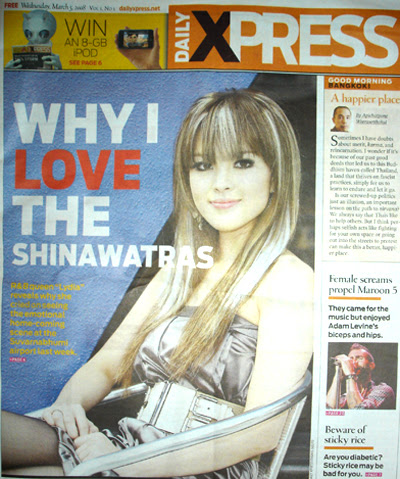 Today saw the launch of Thailand's first free daily newspaper, the Daily Xpress, published in Bangkok by The Nation. (The Nation is one of two daily English-language newspapers on sale in Thailand, the other being the Bangkok Post.)

The first issue of the Xpress has forty-eight pages. Even with ten pages of classified ads, it's an impressive total for a freesheet. 100,000 copies will be distributed every day. The emphasis is on features, human interest, and lifestyle.

The Xpress does have a surprising amount of entertaining and original content. It is, however, disposable rather than informative, and it can't replace other titles as a news source.

To coincide with the Xpress launch, the Nation itself has been rebranded. It now styles itself as "Thailand's biggest business daily", and has shifted its focus almost entirely to business news. Politics and international news have been reduced to one page each, and sports news has been moved over to the Xpress. There is no coverage of general Thai news at all.

This is a risky decision, as it narrows the Nation's target market and takes it out of direct competition with the Post. The new business focus also makes it an odd bedfellow for the Xpress, as the two papers are aimed at opposite audiences. While the Xpress may attract young readers who pick it up for free, the copies bundled with the Nation will probably remain unread.
Categories: media
continued...