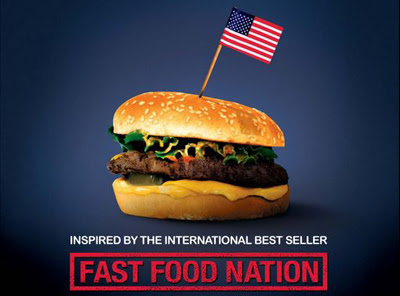 Richard Linklater's film Fast Food Nation is a drama inspired by the superb investigative book of the same name by Eric Schlosser. It follows two recent documentaries on the secretive and unhealthy nature of McDonald's and its products, McLibel and Super-Size Me.

The exploitation of the American fast food industry is illustrated by the experiences of Mexican immigrants working at a meat-packing factory, a student activist who has a McJob at Mickey's (the fictional company created for the film), and a Mickey's executive who investigates claims of contaminated beef. Though the characters are fictitious, the film concludes with genuine Blood Of The Beasts-style slaughterhouse footage.

The narrative intercuts between a series of concurrent stories, though characters from separate stories never meet (except for one shot in which vehicles from two different segments unknowingly stop beside each other at a traffic light). The structure doesn't quite work, though, because it's too episodic. Characters are introduced, they have one or two major scenes, then they are never seen again, leaving numerous plot points unresolved. This pattern is repeated throughout the film, which has an impressive ensemble cast but no strong central plot line to link everything together.
Categories: films
continued...