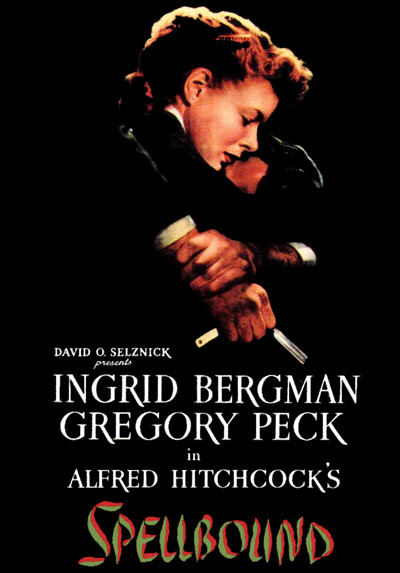 Spellbound was directed by Alfred Hitchcock for producer David O Selznick. The film's theme, psychoanalysis, was suggested by Selznick, who was in analysis at the time. Ingrid Bergman (as radiant as ever) plays Constance Petersen, a psychoanalyst who correctly diagnoses that John Ballantine (played quite blandly by Gregory Peck) is suffering from delusional amnesia. She must discover his real identity before the police find him and charge him with murder.

Selznick was notorious for his personal supervision of the films he produced, often over-ruling the directors and assuming ultimate creative responsibility. (Gone With The Wind, for example, has one credited director, though two others worked on it at different times and Selznick is effectively the film's auteur.) Hitchcock planned his films down to the last detail in pre-production, and, to avoid post-production changes, he shot only the specific angles that he knew he would use. After his Selznick contract expired, he personally produced every film he subsequently directed. The joke in North By Northwest about Roger O Thornhill's middle initial standing for "Nothing" is a sly dig at Selznick's similar affectation, and, more surprisingly, the murderer in Rear Window bears an uncanny resemblance to Selznick.

One of Hitchcock's favourite actors, Leo G Carroll, appeared in five films for the director besides Spellbound. Ingrid Bergman would later star in Hitchcock's Notorious, one of his greatest films. (Incidentally, one reason why it is so great is that Selznick was preoccupied with writing Duel In The Sun so he didn't interfere in the production.)

Spellbound has rather too much psychobabble; the whole script plays like the last reel of Psycho. Also, the early scenes in which Petersen is misconstrued as frigid and a female patient is treated for nymphomania feel laboured and un-necessary. The two close-up point-of-view shots (drinking drugged milk and suicide by shooting, the latter featuring a flash of red in an otherwise monochrome film) are a bit gimmicky. On the other hand, the music score by Miklos Rozsa is fascinating, featuring the first use of the theremin in any film soundtrack.

The film is probably most famous for its short dream sequence, designed by the over-rated Surrealist artist Salvador Dali and directed (uncredited) by William Cameron Menzies. Dali's concepts borrow heavily from the iconography of his previous paintings, and from his and Luis Bunuel's film Un Chien Andalou.
Categories: films
continued...