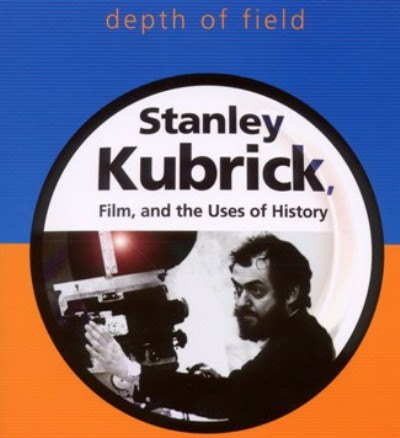 There have been analyses of Kubrick's career by individual writers, and monographs on his individual films, though Depth Of Field: Stanley Kubrick, Film, & The Uses Of History (edited by Geoffrey Cocks, James Diedrick, and Glenn Perusek) presents, for the first time, an anthology on Kubrick's films and themes by a broad range of authors. The impressive list of contributors includes Kubrick's script-collaborators Frederic Raphael and Diane Johnson, Kubrick biographer Vincent LoBrutto, and veteran film critic Jonathan Rosenbaum.

In his essay The Pumpkinification Of Stanley K, Raphael punctuates extended classical allusions with occasional references to his disappointment upon viewing Eyes Wide Shut, the film he co-wrote. He is unrepentant regarding the criticism he received for his self-serving memoir, Eyes Wide Open.

The most bizarre essay is Death By Typewriter, in which Geoffrey Cocks homes in on tiny, insignificant details in order to demonstrate (unsuccessfully) that The Shining is actually a metaphor for the Holocaust. Cocks demonstrates an obsessive interest in trivial minutiae; for some unclear reason, he wants us to realise that the number seven recurs throughout the film, in increasingly obscure and unlikely manifestations. Hilariously, he suggests that, in A Clockwork Orange, the line "You see that shoe?" is a deliberate echo of "You see that, Jew?". (In Annie Hall, this kind of paranoia is played for laughs: "Not 'D'you eat?', but 'Jew eat'".)