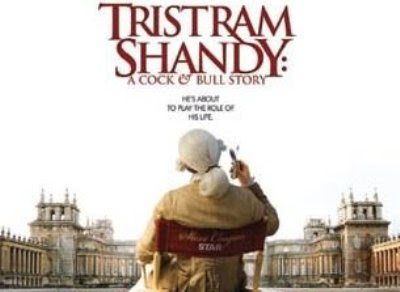 Tristram Shandy (arguably the first work of post-modern art, 200 years avant la lettre) is one of those 'unfilmable' novels, like Naked Lunch and Ulysses, or, for different reasons, Lolita. Those novels have all been filmed, of course, though they can still be described as unfilmable. The film versions of Naked Lunch and Ulysses were unable to reproduce the novels' anarchic streams-of-consciousness. Kubrick's Lolita was a masterpiece, and was scripted by the novel's author himself, though it replaced the book's erotic travelogue with comedy and social satire. (The later remake had fewer censorship problems, though it lacks the merits of either the novel or the original film.)

Now Tristram Shandy has been filmed, too, as A Cock & Bull Story (by Michael Winterbottom). The novel's formal eccentricities haven't quite been replicated in the film version, though its unique narrative style has been successfully transferred and even expanded.

The novel is ostensibly autobiographical, with Tristram Shandy recounting the events of his life, though he is side-tracked by numerous digressions and he frequently interrupts the narrative in order to comment on the very process of autobiographical writing. This structure has been retained by the film, which stars Steve Coogan and Rob Brydon (both TV comedians). Coogan, playing Shandy, steps in and out of character throughout the film, alternating between Shandy, Shandy's father, and himself.

The film's 'in period' scenes (replicating the 18th century novel) are outnumbered by contemporary sequences in which Coogan and Brydon comment on their performances and, backstage, the producers review the rushes and rewrite the script as they go along. Thus, we see Coogan in the make-up trailer preparing for a scene, then performing it on the set, then turning to camera and commenting on the material. We are even shown him being interviewed for a supposed extra feature to be added to the film's DVD.

The funniest scenes are the improvised mock-rivalries between Coogan and Brydon. As they banter backstage, Brydon (are his teeth off-white, or yellow?) and Coogan (why don't his shoes make him seem taller?) both parody their own insecurities. Hilariously, Brydon even imitates Coogan's TV character, Alan Partridge, and Coogan spends much of the film in a futile attempt to disassociate himself from Partridge, the character that made him famous.

A Cock & Bull Story has deliberate echoes of other 18th century period films (it shares music cues with Kubrick's Barry Lyndon, for instance), though, more surprisingly, it has much in common with the films of Woody Allen. In Annie Hall, for example, the adult Allen observes and comments on re-enacted scenes of his childhood. The similarity is most striking in Stardust Memories, in which Allen plays a neurotic film comedian, an exaggerated version of himself. (However, Allen denies any autobiographical element, and feigns surprise when critics associate him with his Stardust Memories character.) A Cock & Bull Story and Stardust Memories both end in the same way, with the actors in a screening-room watching the film and, as it finishes, assessing its quality and discussing their own performances.
Categories: films
continued...