An Encyclopedia Of Swearing 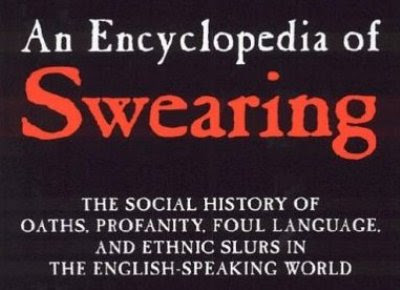 Geoffrey Hughes's 1991 book Swearing is still the only serious academic text on the subject, though it's quite thin and its sources are now outdated. So his new book, the much expanded (though not significantly updated) An Encyclopedia Of Swearing, is a milestone in the field.

The Encyclopedia includes entries for key historical periods (such as medieval, Renaissance, and Restoration), significant writers and texts (including William Shakespeare, Geoffrey Chaucer, and Lady Chatterley's Lover), and swearwords themselves. Of course, I turned first to one entry in particular. The entry for this word discusses medieval usage, a brief (Germanic and Latin) etymology, the Earl of Rochester, and two outdated variants. There is no mention of feminist reappropriation, though, and no discussion of contemporary usage.

In his introduction, Hughes explains that the book is not a dictionary - it does not include a comprehensive list of all known swear words. (For a better analysis of offensive words, see Hugh Rawson's Dictionary Of Invective; for a definitive list of terms, see Jonathon Green's Cassell Dictionary Of Slang.) As an encyclopedia, however, this new book is valuable for its account of the history of swearing - a history often summarised, though rarely described in as much detail as found in Hughes's Encyclopedia.

There are brief repetitions throughout the book, with several anecdotes and quotations duplicated in different entries. Also, he writes that Mary Whitehouse personally influenced Kubrick's decision to withdraw A Clockwork Orange from the UK: "Her objection... led to the director withdrawing the film from showings in Britain", though in reality Kubrick's action was a result of death threats his family received.

The Encyclopedia provides a necessary historical account of swearing, though its sources don't seem sufficiently up-to-date. There are a couple of token references to HBO, though Hughes appears much more comfortable when quoting from medieval manuscripts than from contemporary popular culture.
Tags: books
continued...