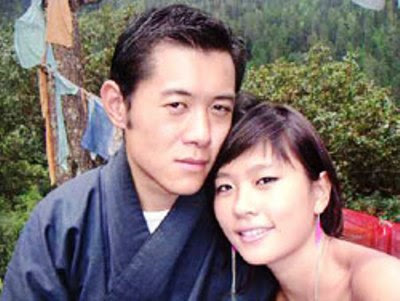 Earlier this month, Thailand celebrated King Bhumibol's sixtieth anniversary. Royalty from other nations came to join the festivities, and the whole event received extensive, reverent coverage throughout the Thai media. By far the most popular royal guest was Jigme Khesar Namgyal Wangchuck, heir to the throne of Bhutan. Jigme has set hearts aflutter, and has become quite a pin-up. However, there is one photo of him that can't be distributed.

The most popular Thai web forum (Pantip) and newspaper (Thai Rath) both printed the picture, showing Jigme and an un-named woman. Thai Rath captioned it "Crown Prince Jigme Girlfiend [sic] From Bhutan paparazzi”. Yesterday, the police Department of Special Investigation imposed a ban on any further circulation of the image, though how they intend to enforce this remains unclear. It has been quietly removed from pantip.com's archives.
Categories: censorship, media
continued...