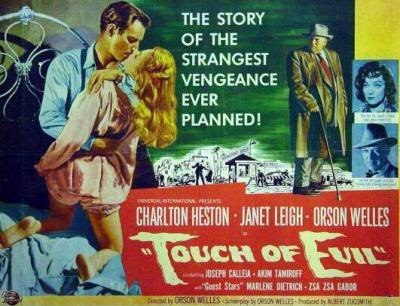 Touch Of Evil, directed by Orson Welles, was the last of Hollywood's initial film noir cycle, bookending a trend that began with The Maltese Falcon. It's an exceptionally dark film; literally so, because several scenes take place in almost pitch blackness. Like all great noir films about high-level police corruption, it has a superb sense of authority and gravitas that it takes great pleasure in unravelling in its conclusion.

The opening shot is one of the greatest sequences in cinema: a four-minute crane shot following an American couple as they cross the Mexican border. When Welles was interviewed for This Is Orson Welles, he said that, with hindsight, he disliked the bravura of this opening shot, pointing out that there is another, longer, more complex crane shot later in the film. This later shot, in which the camera moves through several rooms of an apartment, is less flamboyant and therefore, according to Welles, more of an achievement.

Famously, the film was altered by Universal against Welles's wishes. Some extra exposition scenes were added, and the film was re-edited behind his back. Welles wrote a long memo to the studio, arguing eloquently against the revised version ("In most cases, I can see, or guess, the point of view which has motivated the change, even when I don't happen, personally, to agree with it"), though most of his requests were refused.

In 1976, a longer version of the film was released. This restoration (the version I've seen), while marketed as a director's cut, is more accurately a compromise between the studio's version and Welles's intended vision. It does restore several key scenes originally removed by the studio, though it also retains the non-Welles sequences that the studio added. Finally, in 1998, most of the non-Welles scenes were removed, and the film was re-edited in accordance with Welles's memo.