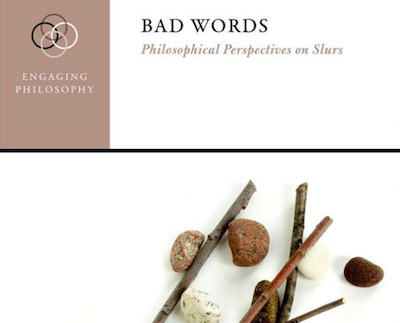 Bad Words: Philosophical Perspectives on Slurs (edited by David Sosa), was published in 2018 as part of a series titled Engaging Philosophy. The final chapter, Nice Words for Nasty Things by Laurence R. Horn, takes its title from an infamous definition by lexicographer Francis Grose in his Classical Dictionary of the Vulgar Tongue: Grose defined the c-word as “a nasty name for a nasty thing”. In his essay, Horn discusses the euphemisms devised to avoid not only tabooed words themselves but also their otherwise-unrelated homophones: “taboo avoidance occurs more broadly, even in the absence of phonological identity between the taboo and innocent items, the latter of which may suffer a kind of contagion or guilt by association”.

Horn cites an interesting French example, que l’on (‘that one’), which is regarded as more polite than the contraction qu’on due to the latter’s homonymy with con (‘cunt’). He also identifies what is surely the earliest instance of the practice, a comment by Cicero in his treatise on rhetoric, Orator. Cicero writes that the Latin cum nobis (‘with us’) should be rendered as nobiscum, to avoid an obscene juxtaposition (“obscænius concurrerent litterae”). The unspoken reference is to cunno bis (‘into the cunt twice’), which supports the (increasingly contested) etymological connection between cunnus (‘vulva’) and ‘cunt’.
Categories: book reviews, the c-word
continued...