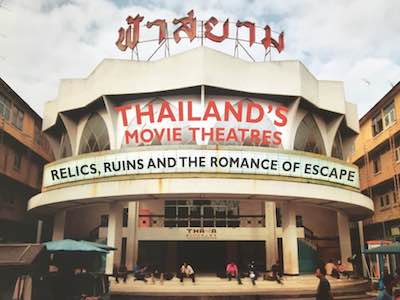 As the book’s subtitle suggests, many of these stand-alone cinemas have been abandoned; in his preface, Kong Rithdee laments this “glorious dereliction”. Notoriously, Siam Theatre was destroyed by arsonists in 2010, a great cultural loss (as it was the first venue to draw crowds to Siam Square in downtown Bangkok), and—to add insult to injury—its demolition gave developers an ideal opportunity to build yet another shopping mall (Siam Square One). Fortunately, the Scala cinema, which Jablon calls “Bangkok’s last movie palace”, is still open for business. Others have been repurposed, such as the Prince Theatre, which was converted into an impressive movie-themed hotel.

Thailand’s Movie Theatres also examines the social history of film exhibition, profiling poster artists such as Piak Poster and voice dubbers like Sirichai Duangphatra. It includes a fascinating account of Sirichai’s dubbing of a Hollywood thriller in 1973: “He had a penchant, moreover, for using his role as dubber to address the day’s top political scandals, both at the national and local level. And corrupt politicians were his number one target. With Serpico, making political satire for Sirichai was like shooting fish in a barrel; it turned out to be his voice-over magnum opus.”

This book, however, is not the magnum opus on Thailand’s movie theatres. That label belongs to Once Upon a Celluloid Planet (สวรรค์ 35 มม.: เสน่ห์วิกหนังเมืองสยาม), by Sonthaya Subyen and Morimart Raden-Ahmad. Once Upon a Celluloid Planet is a more comprehensive guide to Thailand’s stand-alone cinemas, with multiple interior photographs of each venue. It’s also more than twice as long as Thailand’s Movie Theatres, and was published five years earlier (though the two projects were developed in parallel).
Categories: book reviews, Thailand
continued...