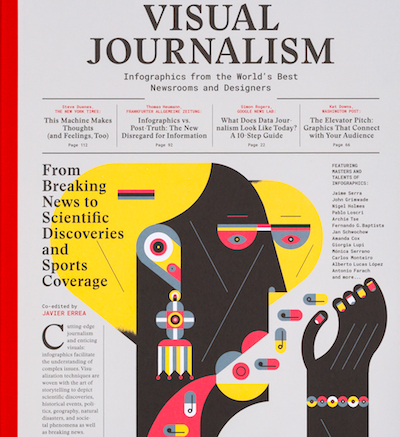 Visual Journalism: Infographics from the World's Best Newsrooms and Designers, edited by Robert Klanten and Anja Kouznetsova, was published last year. (Like Information Graphics, it includes an essay by data journalist Simon Rogers.) The book is primarily a survey of contemporary infographics from newspapers and magazines, though it includes chapters on two modern masters of news graphics: Peter Sullivan and Nigel Holmes.

Sullivan's graphics were not only visually innovative, they were based on data he obtained in the field: he was as much a journalist as a designer. His editor at The Sunday Times, Harold Evans, called him "the most important graphic journalist in the world." For Holmes, a former graphic director at Time magazine, infographics are unapologetically artistic: "It is not information, it is art." (This put him at odds with infographics guru Edward Tufte, who criticised his approach in The Visual Display of Quantitative Information.)

Visual Journalism begins with an essay by Javier Errea, outlining the history of news graphics, including several elaborate 1930s examples from Fortune magazine. Errea cites a 12th September 1702 map in The Daily Courant as (probably) the first graphic image in a newspaper. He also highlights the "legendary" plan of Isaac Blight's house, published in The Times on 7th April 1806. (Oddly, the Blight house graphic is not reproduced in Visual Journalism, though it does appear in Harold Evans' classic Pictures on a Page.)
Categories: book reviews, media
continued...