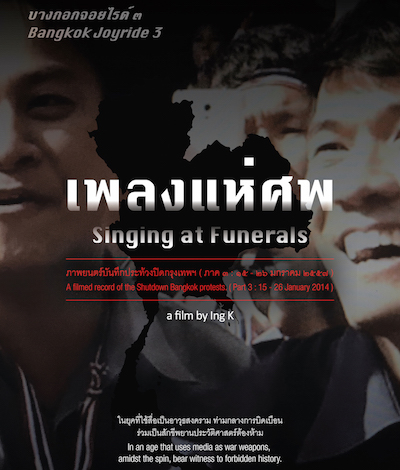 Singing at Funerals follows the same format as the first two chapters, How We Became Superheroes (เมื่อเราเป็นยอดมนุษย์) and Shutdown Bangkok (ชัตดาวน์ประเทศไทย). Filmed on Ing's iPhone, it features excerpts from PDRC rallies (including speeches by Vasan Sitthiket and Ing herself) and extensive footage of street processions. The coverage ultimately becomes excessive: the camera follows Suthep for half an hour as he collects donations from an endless line of protesters. There are also numerous shots of Thai flags being waved, and this fetishisation of the national flag has been a consistent feature of Bangkok Joyride.
Categories: politics, Shutdown Bangkok, Thailand, Vasan Sitthiket
continued...