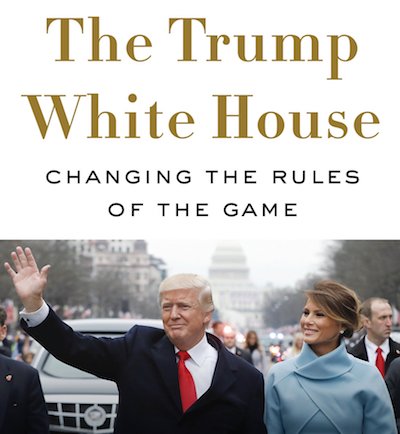 The Trump White House: Changing the Rules of the Game, Ronald Kessler's hagiographic response to Michael Wolff's warts-and-all Fire and Fury, was published today. Kessler writes that "Wolff's book is riddled with false claims," and he lavishes such praise on Trump that it feels like advertising copy: "the Trump brand came to stand for quality, prestige, and success."

Kessler needlessly attacks Hillary Clinton, claiming that she "pretends to be a compassionate woman" and that she "is so nasty to her Secret Service agents" (an allegation that he repeats word for word later in the book). He also recycles Fox News talking points, dismissing any evidence of collusion between Trump and Russia: "the entire Russia collusion story is bogus".

The book's only real interest comes from Kessler's repeated criticisms of Ivanka Trump and Jared Kushner. He argues that they "have been responsible for Trump's most disastrous decisions" and that President Trump would prefer them to leave the White House, though this was revealed by The New York Times a month ago.

In the absence of any real scoops, the book is padded out with presidential trivia: Air Force One, for example, "has a range of 7,825 miles and a maximum cruising altitude of 45,100 feet." It also includes a brief interview with Trump ("the only interview for a book Trump said he has given or will give as president") conducted last year at Mar-a-Lago.
Categories: book reviews, Donald Trump, politics
continued...