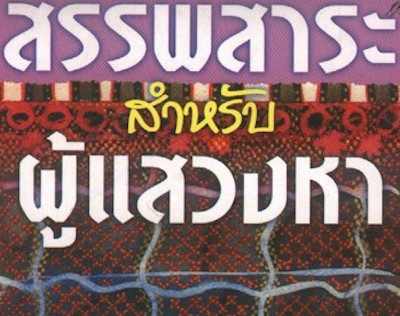 สรรพสาระสำหรับผู้แสวงหา, by Sulak Sivaraksa, was published in 2005. It includes a reprint of an interview Sulak gave to the editor of Same Sky. When the interview was first published, the journal was banned and the editor was charged with lèse-majesté. Sulak has also published an English translation of the interview, in Rediscovering Spiritual Value. (His most recent English-language book is the provocative Love Letters To Dictators.)

Sulak has been personally accused of lèse-majesté several times, and has contributed to various censored films, television programmes, and books. He published an article on the death of King Rama VIII in Seeds Of Peace. His book ค่อนศตวรรษ ประชาธิปไตยไทย was (briefly) banned. Part of his interview in Paradoxocracy was muted. He was interviewed on ตอบโจทย์ประเทศไทย. He also appeared in the once-banned film Tongpan.
Categories: book reviews, censorship, lese-majeste, Thailand
continued...