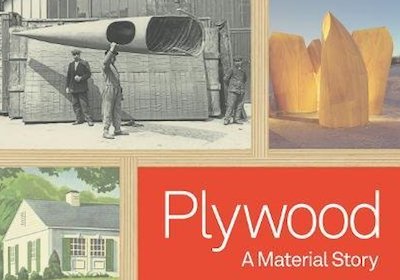 Plywood: A Material Story, by Christopher Wilk, is the first history of plywood as a material for furniture, industrial design, and architecture. As Wilk notes in his introduction, "plywood has a long history that is largely unknown and has been little researched." This comprehensive book, published by Thames & Hudson, more than makes up for that.

The use of plywood in industrial manufacturing was first patented in the early Victorian era, though Wilk traces the process back to the ancient Egyptian craft of gluing layers of veneer: "this is not a story in which a brand new material was born at a particular moment. Instead, it is the adaptation and reuse of a long-understood construction technique in an increasingly broad range of applications."

Plywood and veneering were much maligned in the late nineteenth and early twentieth centuries. Charles Dickens literally personified this attitude in Our Mutual Friend (1865), with its superficial, nouveau riche characters "Mr and Mrs Veneering". Public attitudes to plywood began to shift as it became an increasingly popular material in interior design in the 1930s. By the 1940s, it was firmly established as a modern design material, thanks to moulded plywood furniture by designers such as Charles and Ray Eames.

Wilk also curated the Plywood: Material Of The Modern World exhibition at the Victoria & Albert Museum. Plywood: A Material Story includes extensive notes and a wide range of historical illustrations. It will surely be the definitive work on plywood for the foreseeable future.
Categories: art exhibitions, book reviews
continued...