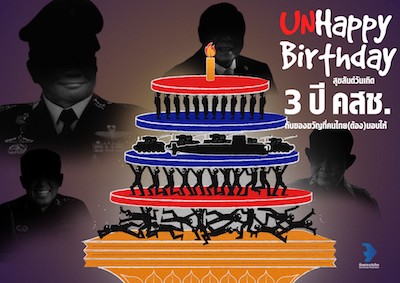 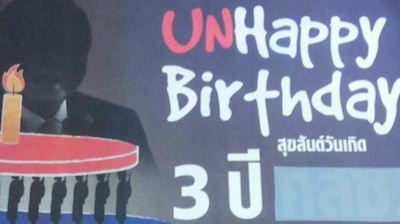 The Democracy Restoration Group, a new pro-democracy group, held a seminar marking the third anniversary of the 2014 coup yesterday and today. (Un) Happy Birthday, at Thammasat University in Bangkok, was subject to several restrictions imposed by the military government.

Participants were not permitted to use the words 'coup' or 'dictator', and they were not allowed to refer to the junta by name. The poster for the event was censored to remove the Thai abbreviation for the NCPO ("คสช"). To circumvent the restrictions, several speakers held up placards containing the banned words during their speeches.

Similarly, when an army spokesman participated in a discussion at the FCCT in Bangkok shortly after the coup, he asked participants to refer to the coup euphemistically as an "intervention". After initially pledging to hold an election in 2015, the junta has repeatedly delayed its 'roadmap', and an election is not realistically expected until 2018 or later.
Categories: censorship, politics, Thailand
continued...