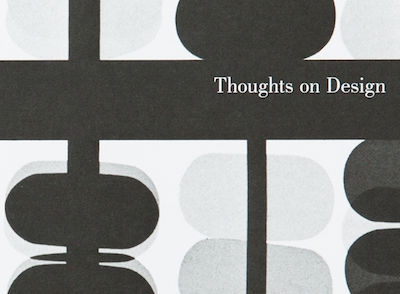 Paul Rand, one of the greatest designers of the last century, was almost single-handedly responsible for the development of corporate branding as a branch of graphic design. His book Thoughts On Design was as influential as Le Corbusier's Towards A New Architecture and Jan Tschichold's The New Typography.

The first and second editions of Thoughts On Design (hardbacks published in 1947 and 1951 respectively) were printed in three languages (English, French, and Spanish), and their black-and-white illustrations were supplemented by eight colour plates. The third edition (a paperback published in 1970) was printed only in English, and its illustrations were all in black-and-white.

The paperback version has been reprinted as a fourth edition, with a new foreword describing Thoughts on Design as "a manifesto, a call to arms and a ringing definition of what makes good design good." Unfortunately, the colour plates from the first two editions have not been reinstated, though Rand's later book A Designer's Art (also recently reprinted) includes plenty of colour images.
Categories: book reviews
continued...