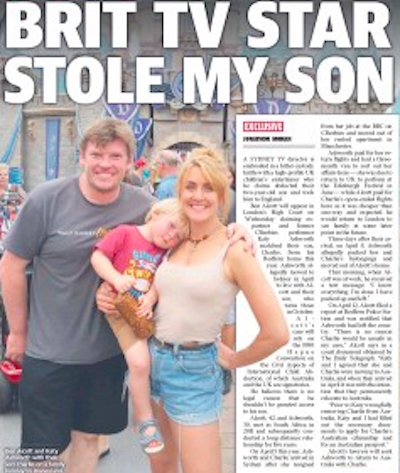 After PJS, NEJ, and RA, another privacy injunction was broken last month, and has been partially lifted as a result. The Daily Telegraph newspaper in Sydney, Australia, revealed that a former BBC children's television presenter and her partner were involved in a custody dispute over their young son: "Ben Alcott will appear in London's High Court on Wednesday claiming that ex partner and former CBeebies performer Katy Ashworth snatched their son, Charlie, from his Redfern home this year."

The article was published on 19th September, accompanied by a large photograph of the family in question. Based on this coverage, two UK newspapers (The Sun and The Times) applied for the removal of the injunction preventing publication of the names of those involved. The judge lifted the injunction in relation to the boy's parents, though their son's identity remains protected, and he can be identified only as D by UK media organisations.

In his judgement, the judge noted The Daily Telegraph's unusually privileged access to the details of the case: "articles appeared in this jurisdiction in The Times, Daily Mail and The Sun. In these the parties' identities were not revealed. However an article also appeared in the Daily Telegraph of Sydney, together with an accompanying photograph, in which the parties and D were named. It is difficult to understand how that newspaper obtained the details for that story".

As in the case of the National Enquirer, The Daily Telegraph's publication of D's identity provided a convenient defence for the UK newspapers, as they could argue that the injunction had already been broken elsewhere and that it would, therefore, be ineffective to maintain it in the UK. This explanation is plausible as The Daily Telegraph, The Times, and The Sun all have the same proprietor, Rupert Murdoch.
Categories: censorship, media
continued...