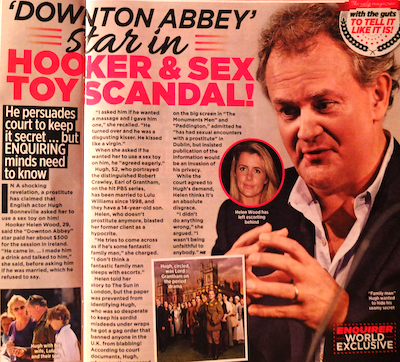 After naming PJS and YMA, the National Enquirer has now broken another injunction by identifying actor Hugh Bonneville, who had previously been referred to only as NEJ. Bonneville was granted a High Court injunction against The Sun newspaper in 2011, to stop it from revealing that he had slept with a prostitute, Helen Wood.

Under the terms of the original injunction, neither Bonneville nor Wood could be identified, though the restrictions were partially relaxed and Wood's identity was disclosed. Bonneville had already been mentioned by the Herald On Sunday newspaper in New Zealand on 24th April, in an article about PJS (headlined "Celebs, threesomes and ridiculous privacy laws"), though the Herald didn't disclose any details of his case.

Emboldened by the publicity it generated after exposing PJS and YMA, the National Enquirer named Bonneville in its issue dated 16th May. In an article headlined "'DOWNTON ABBEY' star in HOOKER & SEX TOY SCANDAL!", the supermarket tabloid summarised the more sensationalist aspects of this "shocking revelation". The Enquirer is published in America, and the injunction applies only in England and Wales.

As the Daily Mail had done following the PJS and YMA coverage, The Sun printed the Enquirer's article with the incriminating details redacted. In its current issue, dated 23rd May, the Enquirer boasts that it "refused to back down from publishing all the lurid details of the jaw-dropping story."