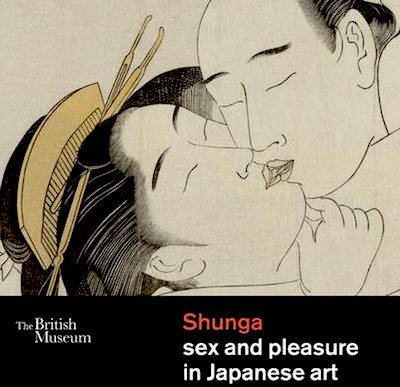 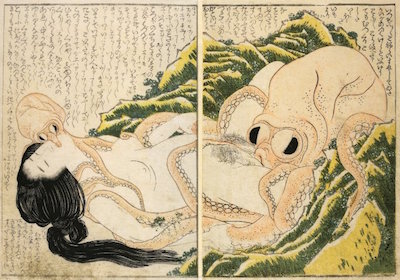 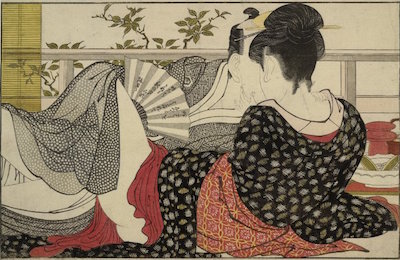 The catalogue begins with a detailed introduction by Timothy Clark and C Andrew Gerstle, who compare the fantasies depicted in shunga to the "pornotopia" described by Steven Marcus in The Other Victorians. Edo Japan and Victorian Britain were both seemingly conservative societies, though they were also prolific producers of pornography. (Even in contemporary Japan, there is a separation between public reserve and private consumption of sometimes extreme imagery.)

Shunga was produced as emaki (scrolls) and illustrated books, and even as shikake-e (early examples of paper engineering), though it was most often associated with ukiyo-e (woodblock prints, known as 'images of the floating world'). An essay by Ishigami Aki demonstrates that shunga was influenced by the Chinese 'chunhua' genre of sex-education manuals. (Thus, like origami and bonsai, shunga is another apparently Japanese tradition that actually originated in China.)

Katsushika Hokusai, whose Great Wave is the most celebrated ukiyo-e print, also produced "perhaps the most famous of all shunga images", Kinoe No Komatsu (1814). (This illustration of a woman being pleasured by an octopus was also included in the Barbican's Seduced exhibition.)

In the introduction, Kitagawa Utamaro is described as "arguably the greatest shunga artist of all," and an essay by Kobayashi Tadashi cites Utamaro and Torii Kiyonaga as "two artists who were the most remarkable in the whole history of shunga". Tadashi writes that Utamaro's Utamakura (1788) and Kiyonaga's Sode No Maki (1785) "vie for the title of greatest shunga masterpiece" though Kiyonaga's work "should surely be placed at the summit of achievement among all Japanese shunga."

Jennifer Preston discusses the censorship of shunga in the Edo period. Nishikawa Sukenobu's Fufu Narabi No Oka (1714) was the first shunga to be suppressed: "the courtly references in the work, such as details of the imperial palace, came to the attention of the authorities and Sukenobu was severely punished." Sukenobu's Hyakunin Joro Shinasadame (1723) was also banned. Later, the illustrated book Ehon Taikoki and Utamaro's Taiko Gosai Rakuto Yukan No Zu were both banned in 1804. Novelists Santo Kyoden and Tamenaga Shunsui were manacled for fifty days (in 1791 and 1842 respectively).

Censorship of shunga began again in the twentieth century. Ishigami Aki recounts the 1960 obscenity charges against Hayashi Yoshikazu's book Ehon Kenkyu, Kunisada (a historical study of shunga). Yoshikazu was convicted after a thirteen-year trial, though when he updated the book in 1989, as Edo Makura-eshi Shusei, it was published uncensored.

The catalogue features more than 400 illustrations, with some fold-out pages. It also includes biographies of shunga artists, with names and titles printed in Japanese kanji, and an extensive bibliography. Timon Screech, author of the first academic study of shunga (Sex & The Floating World, 1999), also contributes an essay to the catalogue. Richard Lane's Images From The Floating World (1978), the classic study of ukiyo-e prints, includes several examples of shunga.
Categories: art exhibitions, book reviews, censorship
continued...