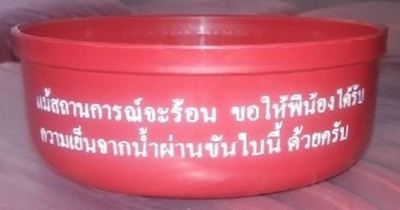 In a joint police and military operation yesterday, more than 10,000 red water bowls were seized from former Pheu Thai politicians in Nan, a province in northern Thailand. 8,862 bowls were taken from one former MP, and 1,500 from another.

The bowls include a message from former prime ministers Thaksin and Yingluck Shinawatra: "แม้สถานการณ์จะร้อน ขอให้พี่น้องได้รับความเย็นผ่านขันใบนี้" ('although the situation is hot, everyone can keep cool with water'). They were due to be distributed to Pheu Thai supporters before the Songkran water festival later this month.

In a similar case earlier this year, officials in Roi Et province banned distribution of Thaksin and Yingluck calendars. Yingluck herself is currently on trial at the Supreme Court following her impeachment in January.
Categories: censorship, politics, Thailand, Thaksin Shinawatra, Yingluck Shinawatra
continued...