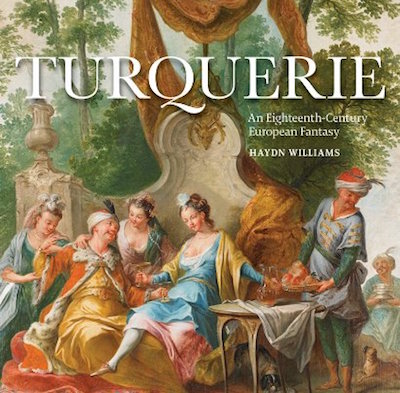 Turquerie: An Eighteenth-Century European Fantasy, by Haydn Williams, is "the first book to look at the artistic phenomenon known as turquerie." It begins with a definition of this little-known trend: "Turquerie is a term used to describe a European vision of the Ottoman Turkish world that was made manifest in a variety of art forms."

As the book's subtitle suggests, turquerie was primarily an eighteenth-century vogue, though Williams traces its pre-history following the Ottoman Empire's capture of Constantinople in 1453: "To galvanize opposition, propagandists worked hard to demonize the Turk." This continued until the end of the Ottoman-Habsburg wars: "The 'great fear' of the Turk in Europe gradually diminished after the failed siege of Vienna in 1683. Concurrently... turquerie in its varied forms reached its fashionable apogee. Europeans became fascinated by many aspects of the Ottoman world".

Turquerie was popular at the same time as another exotic trend, Chinoiserie (the Western imitation of Chinese decoration), though they were ultimately replaced by other influences: "By the middle of the 19th century in Europe the insouciant turquerie fantasies of the previous century had been displaced by others of equal fancy." One of these subsequent styles was Japonisme, which developed in the second half of the eighteenth century.

Williams examines the influence of turquerie on European painting, architecture, and interior design, all of which are illustrated in colour. The chapter on the applied arts is the most fascinating, with its lavish illustrations of enamelled boxes, Meissen porcelain, and clockwork automata.
Categories: book reviews
continued...