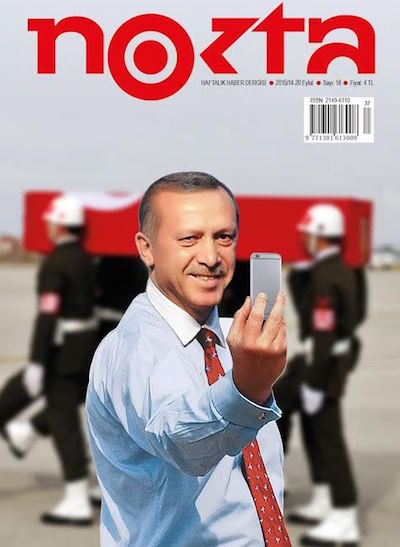 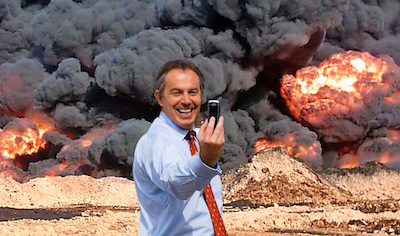 Police in Istanbul raided the editorial offices of the Turkish weekly magazine Nokta yesterday. All copies of the 14th September issue were seized before distribution, and the magazine was banned for insulting President Erdoğan. Nokta's cover shows a Photoshopped picture of Erdoğan smiling while taking a selfie in front of a Turkish soldier's coffin. The photograph is an adaption of Photo Op, the 2005 image of Tony Blair created by Peter Kennard and Cat Phillipps.

Erdoğan has a long history of suppressing any criticisms of his leadership, both as Prime Minister and President. He filed lawusits against Cumhuriyet newspaper in 2004 and the magazine Penguen in 2005. Artist Matthew Dickinson was charged with insulting Erdogan in 2006; he was charged again shortly afterwards, though was later acquitted. Two Penguen cartoonists received jail sentences earlier this year, after caricaturing Erdoğan in a 2014 magazine cover.
Categories: censorship, media, politics, Tony Blair
continued...