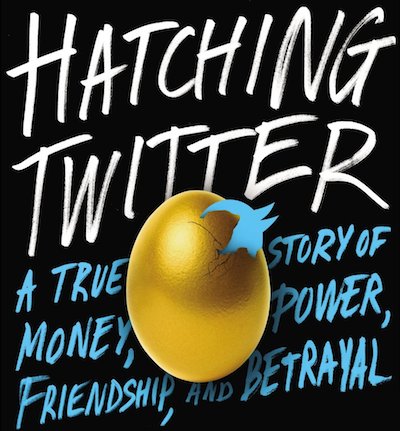 Hatching Twitter, by New York Times columnist Nick Bilton, tells the story of Twitter's first seven years. It follows another book about a major internet company, The Everything Store: Jeff Bezos & The Age Of Amazon by Brad Stone. Bilton has interviewed the company's founders - Evan Williams (who also founded Blogger), Jack Dorsey, Biz Stone, and Noah Glass - and current CEO Dick Costolo, though their quotes are not attributed and there's no index.

When describing key moments in the Twitter narrative, Bilton sets the scene by describing the weather, the locations, and even the clothes worn by the protagonists. At times, this feels too much like American Psycho, with Jack Dorsey as Patrick Bateman: "He slipped on his dark Earnest Sewn jeans, tucked in his crisp white Dior shirt, then rubbed gel into his hands and scuffed his hair to perfection." Such atmospherics aren't necessary, as the story itself has plenty of drama, with constant boardroom tensions between Twitter's co-founders.

Hatching Twitter's original subtitle was A True Story Of Money, Power, Friendship, & Betrayal. For the paperback edition, the subtitle was changed to How A Fledgling Start-Up Became A Multibillion-Dollar Business & Accidentally Changed The World.
Categories: book reviews
continued...