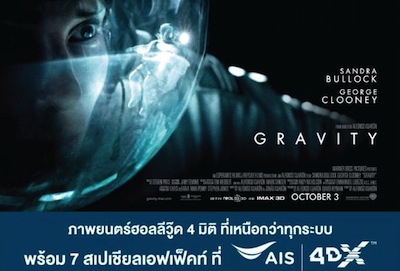 Gravity, directed by Alfonso Cuaron, stars Sandra Bullock and George Clooney as two astronauts who are left stranded after satellite debris destroys their space shuttle, the Explorer. To survive, they must reach nearby space stations (the International Space Station and the Chinese Tiangong station) before their oxygen supply is depleted. Cuaron previously directed Y Tu Mama Tambien, one of the key films of the Mexican Nueva Ola (New Wave) movement.

Gravity relies extensively on photo-realistic CGI, not only for the backgrounds and spacecraft, but even for the astronauts' spacesuits. In some sequences, the actors' faces are the only non-CG elements in the frame; a minor character, who appears in the first scene, is entirely CG, blurring the boundaries between live action and digital animation.

Cuaron's Children Of Men was acclaimed for its long takes, and Gravity begins with a seventeen-minute sequence without a visible edit. In both films, however, these shots consist of multiple takes connected by seamless digital transitions, creating the illusion of a single take. (Touch Of Evil famously begins with an extended single take; Timecode and Russian Ark were both filmed as a continuous, unedited digital shot.)

Gravity occasionally resembles Kubrick's 2001: A Space Odyssey, and it features some direct tributes to that film, including a floating pen suspended in zero gravity. The ending was presumably inspired by another science-fiction classic, as Sandra Bullock's character has the same determination as Ripley from Alien. There is also a reference to Wall-E, with a fire extinguisher being used as a propulsion device.

I saw Gravity in 4DX, which combines 3D projection with motion-controlled seats, wind effects, smoke, scents, and water vapour sprayed into the audience. The process was developed in South Korea, and was first used for Eric Brevig's 3D remake of Journey To The Center Of The Earth. Gravity has also been released in 3D, 2D, and IMAX DMR 3D.