The Empire Of Death 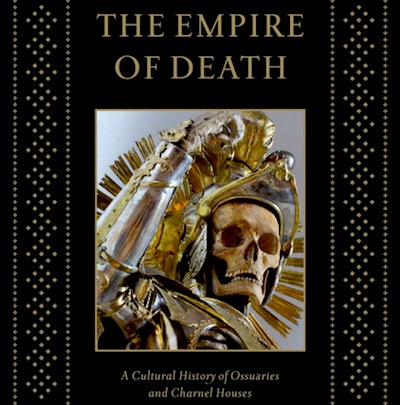 For thousands of years, human remains have been preserved in charnel houses and ossuaries. Originally, these sites were simply a more practical alternative to burial: a body would be interred only temporarily, and, after decomposition, the remaining skeleton would be placed in an ossuary or charnel, thus reducing the demand for graveyard space.

The Empire Of Death: A Cultural History Of Ossuaries & Charnel Houses, by Paul Koudounaris, is the first full-length study of these macabre places. In his introduction, Koudounaris briefly outlines cultural attitudes towards death, citing Mary Douglas, Julia Kristeva, Norbert Elias, and Mikhail Bahktin (though not Georges Bataille).

In chapters with evocative titles such as The Triumph Of Death, Koudounaris presents an international history of charnels and ossuaries. His survey includes charnels with piles of disarticulated skeletons (such as St Catherine's monastery in Sinai, Egypt), decorative skulls displayed in European churches (notably Rome's Capuchin Crypt), and underground tableaux of clothed, mummified bodies (most famously, the Capuchin Catacombs in Palermo, Italy).

There are countless skeletons displayed in each ossuary, with rows of neatly-aligned skulls filling entire walls. The Sedlec Ossuary in the Czech Republic, for example, is a chapel decorated with thousands of skulls and bones, including an enormous skeletal chandelier.

The book (published by Thames & Hudson) is beautifully printed, resembling an old Bible with its gold-embossed covers and manuscript-style typography. This is appropriate given its emphasis on Christian ossuaries and charnels. (The text excludes pre-Christian traditions, such as the Mayan and Aztec tzompantli.) There are extensive notes, and numerous full-page images photographed by the author.
Categories: book reviews
continued...