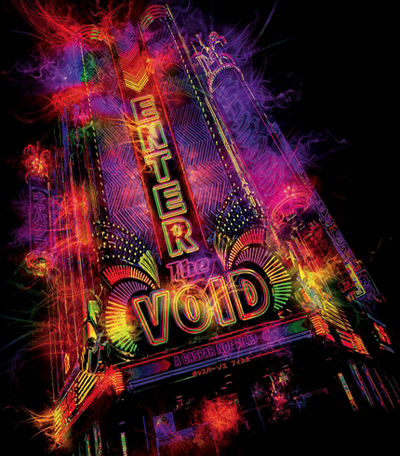 Gaspar Noe is one of the most provocative (and therefore fascinating) directors in contemporary cinema. He has directed several explicit short films, the confrontational I Stand Alone, and the shocking Irreversible. Enter The Void features all of his trademarks: transgressive content, strobe lighting, and Brechtian alienation devices.

For much of the film, we are inside the protagonist's head, experiencing what he sees through a subjective camera. Similar experiments in first-person-perspective filming were attempted by Orson Welles for his abandoned Hearts Of Darkness project, and more successfully by Robert Montgomery in his noir thriller Lady In The Lake. There are also long sequences of psychedelic abstract light effects, inspired by the 'stargate' sequence from Kubrick's 2001: A Space Odyssey. (2001 is another long-standing Noe influence, and a 2001 poster appears at the end of Irreversible; Enter The Void, Irreversible, and 2001 all finish with the birth of a baby.)

The subjective camera and abstract effects are bravely uncommercial and experimental, though also repetitive and long-winded. Indeed, some of these longueurs have been shortened for alternate versions of the film. The original Cannes premiere was the longest version, though it had no opening credits. Four minutes were cut, and credits added, for subsequent festival screenings (and this is the version that I've seen); at some festivals, different music was used for the credits sequence. For general release, reel seven was removed entirely, just as Quentin Tarantino removed a reel from Death Proof. Also, Noe insisted that the film be screened at 25fps rather than the standard 24fps.

Noe is a key figure in the so-called New French Extreme movement, and Enter The Void contains the requisite amount of transgressive sex - filmed internally, as in Channel 5's 21st Century Sex - and graphic violence. An aborted foetus is shown, as in Four Months, Three Weeks, & Two Days. These extreme images, and the regular use of strobe lighting, represent a deliberate attempt at audience provocation, recalling the early films of Michael Haneke and particularly Funny Games.
Categories: censorship, film reviews
continued...