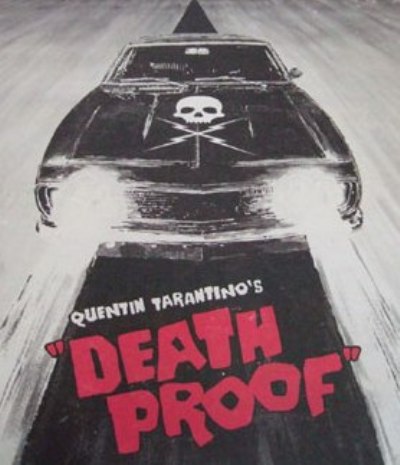 Quentin Tarantino's Death Proof was originally part of Grindhouse, a double bill also featuring Planet Terror. After the lukewarm American reaction to Grindhouse, the concept was dropped for international markets, and instead the films have been released separately. The revised release pattern enabled Tarantino (who also did his own cinematography) to add almost thirty minutes to Death Proof, including much more dialogue and a lap-dancing scene which was completely cut from the Grindhouse version. After reviving other 1970s exploitation genres (Blaxploitation in Jackie Brown and 'chop socky' kung-fu in Kill Bill), Grindhouse is a natural progression, in which he uses jump-cuts and scratched prints to recreate the lurid experience of 1970s grindhouse films. Death Proof was shot entirely on location, which adds to the cheap, gritty grindhouse look.

The film has two halves, which are roughly parallel. In each segment, a quartet of women is observed at a distance by Stuntman Mike, a retired film stuntman. Mike is one of the few characters in cinema to get sexual pleasure from car crashes (the only other example that comes to mind is Crash, the JG Ballard novel and David Cronenberg film). The first half of Death Proof ends with Mike crashing into the girls' car at 200mph, killing all four of them. In the second half, after he chases the girls (in a stunningly tense though implausible sequence) they are eventually able to overtake him, leading to a (convincingly grindhouse-style) feminist revenge ending.

Death Proof (titled Thunder Bolt in a split-second jump-cut during the title sequence) is exactly what you'd expect a Tarantino car-chase film to be. It's full of witty, profane, trivial, naturalistic dialogue; it has moments of bloody, stylised violence; there are constant references to cult cinema, music, and television; there's a cool 1970s soundtrack; there's a low-angle point-of-view shot (from inside a car bonnet, rather than the usual car boot); it exists within the self-referential Tarantino universe, with name-checks for Big Kahuna Burger and Red Apple cigarettes (from Pulp Fiction) and recurring characters (from Kill Bill). There are even in-joke references to his other films: Tarantino (in a traditional cameo) repeats the "tasty beverage" line from Pulp Fiction, and Rosario Dawson's ringtone is a Bernard Herrmann composition used in Kill Bill.
Categories: film reviews
continued...